$175.00
1 of 1 Warrior Mask - Says Mother Africa on the side and Outsole is different ROCKDEEP Warrior Mask ROCKDEEP BLUEThe second in a series of different Warrior Mask releases.  Original in design and color the Warrior Mask represents the history of those of our culture who fought to protect lands and......

The second in a series of different Warrior Mask releases.  Original in design and color the Warrior Mask represents the history of those of our culture who fought to protect lands and their people.

Masks serve an important role in rituals or ceremonies with varied purposes like ensuring a good harvest, addressing tribal needs in time of peace or war, or conveying spiritual presences in initiation rituals or burial ceremonies. Some masks represent the spirits of deceased ancestors. Others symbolize totem animals, creatures important to a certain family or group. In some cultures, like the Kuba culture of Zaire, masks represent specific figures in tribal mythology, like a king or a rival to the ruler.

The wearer of the mask is often believed to be able to communicate to the being symbolized by it, or to be possessed by who or what the mask represents. 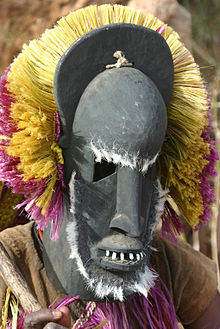 Dogon ceremonial mask in use

Ritual and ceremonial masks are an essential feature of the traditional culture of the peoples of a part of Sub-Saharan Africa, e.g. roughly between the Sahara and the Kalahari Desert. While the specific implications associated with ritual masks widely vary in different cultures, some traits are common to most African cultures. For instance, masks usually have a spiritual and religious meaning and they are used in ritual dances and social and religious events, and a special status is attributed to the artists that create masks to those that wear them in ceremonies. In most cases, mask-making is an art that is passed on from father to son, along with the knowledge of the symbolic meanings conveyed by these masks. African masks come in all different colours, such as red, black, orange, and brown.

In most traditional African cultures, the person who wears a ritual mask conceptually loses his or her human life and turns into the spirit represented by the mask itself.[1] This transformation of the mask wearer into a spirit usually relies on other practices, such as specific types of music and dance, or ritual costumes that contribute to the shedding of the mask-wearer's human identity. The mask wearer thus becomes a sort of medium that allows for a dialogue between the community and the spirits (usually those of the dead or nature-related spirits). Masked dances are a part of most traditional African ceremonies related to weddings, funerals, initiation rites, and so on. Some of the most complex rituals that have been studied by scholars are found in Nigerian cultures such as those of the Yoruba and Edo peoples, rituals that bear some resemblance to the Western notion of theatre.[2]

Since every mask has a specific spiritual meaning, most traditions comprise several different traditional masks. The traditional religion of the Dogon people of Mali, for example, comprises three main cults (the Awa or cult of the dead, the Bini or cult of the communication with the spirits, and the Lebe or cult of nature); each of these has its pantheon of spirits, corresponding to 78 different types of masks overall. It is often the case that the artistic quality and complexity of a mask reflects the relative importance of the portrayed spirit in the systems of beliefs of a particular people; for example, simpler masks such as the kple kple of the Baoulé people of Côte d'Ivoire (essentially a circle with minimal eyes, mouth and horns) are associated with minor spirits.[3]

Masks are one of the elements of great African art that have most evidently influenced European and Western art in general; in the 20th century, artistic movements such as cubism, fauvism and expressionism have often taken inspiration from the vast and diverse heritage of African masks.[4] Influences of this heritage can also be found in other traditions such as South- and Central American masked Carnival parades.